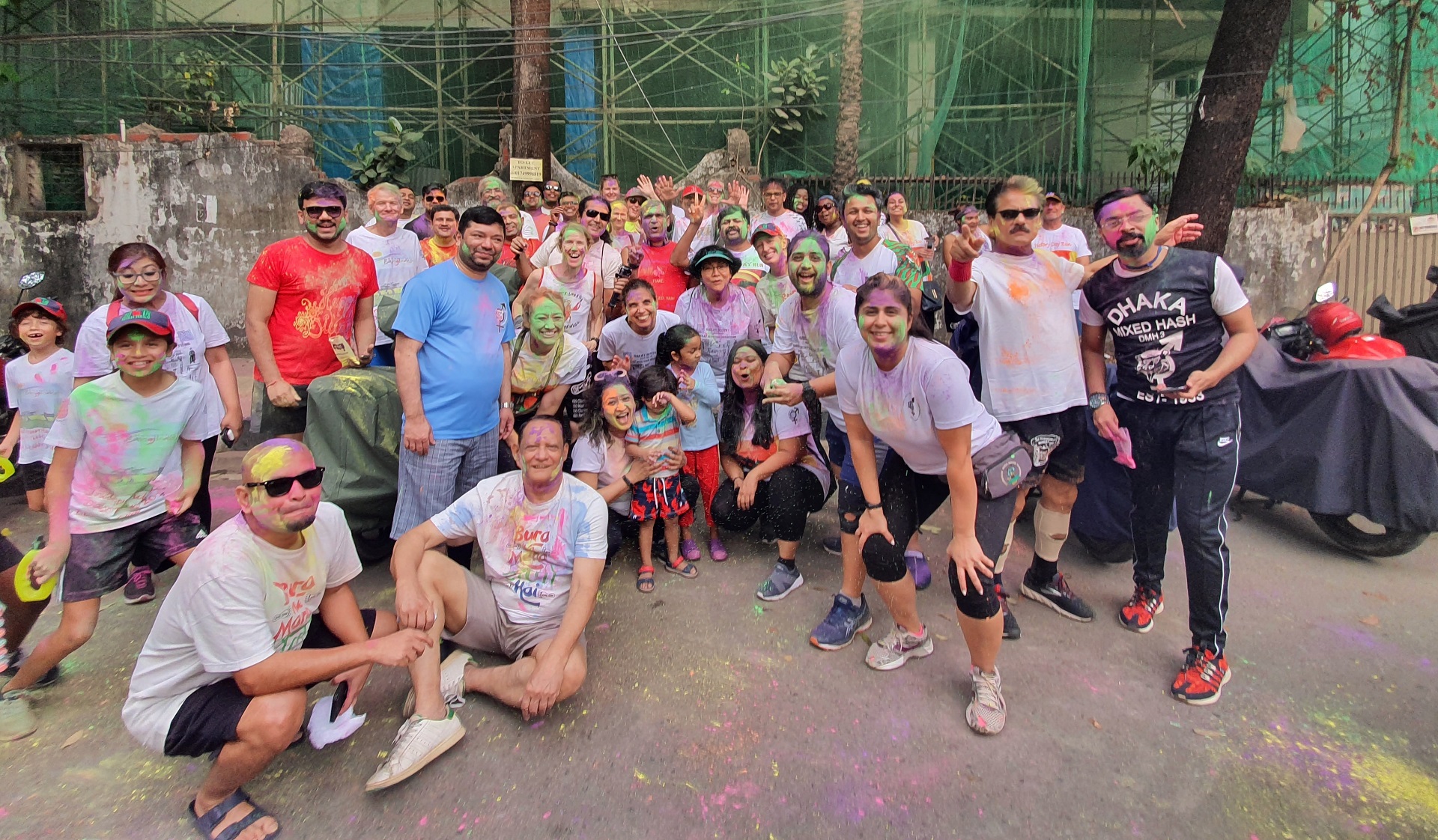 The Hash House Harriers (HHH or H3) is an international group of non-competitive running social clubs. An event organized by a club is known as a hash, hash run or simply hashing, with participants calling themselves hashers or hares and hounds…

Alberto Stephano Ignatius Gispert known as “G” established the Hash House Harriers in colonial KL in 1938. In 1928, “G” joined Evatt & Co and was sent out on his first posting to Singapore.

Ronald Bennet known as “Torch” (he possessed a shock of flaming red hair) joined “G” in 1934 and they became the best of pals.In 1936, “Torch” moved to KL and in 1937, “G” was appointed the Branch Manager in Malacca. During his posting in Malacca, “G” discovered with relish, the local Springgit Harriers who were mainly men with a few women who ran in and around the nearby rubber estates .

The same year, “G” was transferred to Kuala Lumpur. On Monday nights, his main interest became the Federated Malay States Volunteer Reserve. Captain Gispert was the OC of “A” Company (Machine Gun) Selangor Battalion. The headquarters was situated next to the Sultan of Selangor’s residence, close to Selangor Club.

However, “G” sorely missed his outings with the harrier group and he started making enquiries. He heard from Cecil Lee that the former popular Kuala Lumpur Harriers (men and women) had faded completely into obscurity around the time of the slump.

“G” concluded that he should revive it but this time, it would be on a men only basis. “G” found that Frederick “Horse” Thompson was also working in KL then. “Tommy” was an experienced paper chaser some six years earlier (1932) in Johore Bahru, where he claims “hashing” actually got started. ‘G’ quickly set about sowing the Springgit seeds in the Malaysian capital. Torch gave tremendous support for this idea and they frequently discussed the project over a bottle or so of Tiger Beer, beneath the twirling fans at the famous long bar of the Selangor Club – a favourite sanctuary where women were excluded from entering. The “harrier” topic was often raised at dinner too, in the adjacent Selangor Club Chambers where “G” resided then.

The activity was then ‘just looking for a name. G collared his friend, Cecil H. Lee and Arthur Westrop, a member and staunch supporter of the previous KL harrier group in the 1920s and they immediately agreed to participate.

Having now set up the requisite nucleus, “G” persuaded the group and some others to start a Kuala Lumpur group based on the similar and familiar lines known to them.

In those days, young bachelor expatriates had their own messes where they were billeted. One such mess was the Selangor Club Chambers, situated within the environs of the Selangor Club. This edifice stood almost opposite the existing entrance to the old wing of the Selangor Club, although some yards back. It acquired the epithet “Hash House” from its residents. Several of the charter members lived in the Selangor Club Chambers and were members of the Club. The Chambers had a dining room on the ground floor and living quarters on the first floor. The residents referred to the Chambers as the “Hash House” because of the monotonous food (hash, being an old army slang for food). Cecil admitted that the food was actually very good. “Harriers” came about from the roots of cross country running sport in Britain known as “Hares and Hounds”. These paper chases, patterned after the traditional British paper chase or “hare and hounds”.

“G” quickly dubbed the new club the name “HASH HOUSE HARRIERS”. It proved to be an immortal label for his new creation. Innovative, fitting and even finer, it was alliterative – HHH. The catchy name was immediately adopted.

Symbol of the Hash House Harriers

The traditional symbol of the HHH is the outline of a human foot, or a pair, often including the phrase “On-On”.

One early Friday evening, towards the last week of Deember of 1938, “G’s” persistence paid off. Run No. 1 started off from the Selangor Club Chambers. A dozen or so members went out and ran on his inaugural paper trail. The Charter members or  infamous nine were:

Cecil recollected that they used to run around KL and Maxwell Road where the jungle started. They would drink beer mixed with ginger beer and ice out of the old time tin bath tubs. He even recalled they ran once a week but initially on a Friday. Runs would be kept to about 1.5 hours after which they would stand around talking and drinking after the run.

The group flourished and the HHH duly celebrated their 100th run on 15th August 1941. The HHH postponed their runs on Run No.117, 12th December 1941, one week after the Japanese landed in Malaya.

The war and the Japanese invasion took its inevitable toll and “G”, the cheerful inspiration and founder of the HHH, who was a volunteer in the Reserves, was killed in action in Singapore on 11th February 1942, at the tender age of 38.

There already were a few paper chase groups running in parts of the country but there is no record of their frequency and they never survived for long. None of the early clubs seem to have survived long or more importantly, none of them were re-formed after the War. As a tribute to the memory of “G”, Torch re-established the HHH on Mondays, after the war in 1946.

After World War II, in an attempt to reorganize in the city of Kuala Lumpur, they were informed by the Registrar of Societies that as a “group,” they would require a constitution.

The objects of the Association, as written by Don Kennedy were:

1. To promote physical fitness among its members

2. To get rid of week-end hango- vers

3. To acquire a good thirst and to satisfy it in beer

4. To persuade the older members that they are not as old as they feel

Membership is open to all male persons who are interested in taking part in a weekly cross-country paper chase. The first post-war run was around the race course in August 1946.

The second continuously running Hash chapter was Singapore which was founded by Ian Cummings on 12th February 1962. In 1963, Brunei, Kuching and Sandakan were founded, Jesselton (now Kota Kinabalu), Sibu and Miri in 1964, Ipoh and Penang in 1965.

Dhekelia (an army base) in Cyprus was the first Hash Chapter created outside South East Asia in January 1967, followed by Hobart and Sydney in October 1967 and Episkopi (Cyprus) in November 1967. In 1973, there were only 35 HHH chapters worldwide, of which 11 were in Malaysia. As of 2003, there are even two organised HHH groups in Antartica.

The subsequent (and continuing) explosion of the number of Hash Chapters worldwide is a source of quiet amazement to many hashers, most of whom know only their own Hash Chapters and their weekly runs. Numbers are not too exact among typical Hash MisManagement but the latest estimate is that there are over 2,000 Hash chapters in 185 countries worldwide, running in every possible type of terrain and cli- mate, everyday of the week. As of 2003, there are even two organized chapters operating in Antarctica.

The boom is owed largely to the power of the internet to provide timely and accurate information on chapters and their events and points of contact.

The HHH movement in Kuala Lumpur in 1938 is unique and had sowed the seeds of today’s worldwide movement. It was also possibly something in the character of our founder ‘G’ Gispert, that made the returning survivors resurrect the HHH as a tribute to him. It was evident that ‘Torch” Bennet played a major foundation role in maintaining the administration of the HHH in the fledging years (On-Sec from 1938 to 1940 and again from 1946 to1948) by numbering the runs, sending out circulars, etc, thus ensuring that continuity was established.

The rubber plantations and jungles of Malaya in the early years also played a significant role in ensuring the survival of the HHH as they have always been within easy reach of the cities and were absolutely perfect for  the sport of Hashing, as it was then, and as it has developed today. Long may the HHH continue to expand.

Based on interviews and correspondence with Cecil Lee, ‘Horse’ Thomson, ‘Torch’ Bennett, Frank Woodward and other veteran hashers). Reproduced from an article written by Mike Lyons for Infomag Interhash 1998 Kuala Lumpur and Hash Archives – Trail to Kuala Lumpur.